Where Do Ferrets Come From? 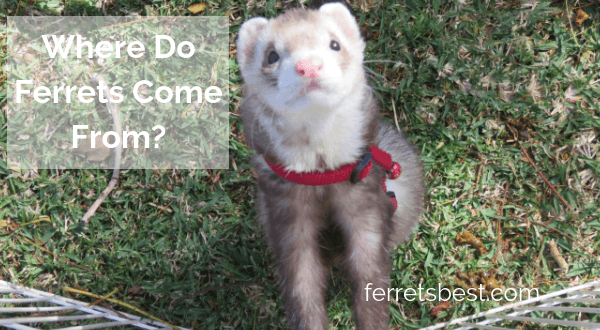 Where Do Ferrets Come From?

Unlike dogs and cats, whose ancestors can clearly be seen throughout North America and many other parts of the world, it can be hard to see where the rambunctious, bouncy ferrets in the pet store come from in the wild. In this article, we will discuss the origins of the domesticated ferret as well as some of their close relatives living in the wild today.

Ferrets have been living with humans over two thousand years, and due to their mischievous and rambunctious nature, have been used for hunting, mainly helping to chase down rodents who live in burrows and holes out of their homes. It is theorized by some that ferrets first served the the ancient Egyptians, but no firm record exists to support this suggestion. It is more likely that the Romans were the first to utilize ferrets for their skills.

While it is not entirely clear when the European ferret was introduced to the United States, by the early 1900s these creatures were definitely familiar to the Eastern US. They most likely came to the US aboard ships intentionally to keep rats at bay.

Ferrets were introduced intentionally to New Zealand in the 1860s in order to help keep the population of rabbits under control. Rabbits were not indigenous to that area of the world, and were causing problems to native vegetation and had no natural predators. Unfortunately, the introduction of ferrets to the island had issues on the local bird population, which previously were not familiar with mammalian predators.

When people hear about the black-footed ferrets of North America, many people assume that these are closely related to the domesticated ferrets that live side by side with humans. However, black footed ferrets are distinctly different and are actually illegal to own due to their endangered species status. Black footed ferrets nearly went extinct due to distemper and other disease they did not have immunity to. By the 1980s, less than 20 remained in the wild. Now, there are thousands living in the western United States, a significantly lesser number than a century ago. You can find them in areas that also have abundant populations of prairie dogs, as one ferret can eat up to 100 prairie dogs a year.

Further away, domesticated ferrets are related to weasels, minks, pine martens, skunks, and a number of other animals. However, the ferret is the only member of the family that has consistently been domesticated for human companionship.

Ferrets are incredibly entertaining and silly animals, and a product of thousands of years of domestication. Those who worked on the early domestication of ferrets could not have had any idea the comfortable and cushy life that the descendants of their hunting partners are now enjoying.