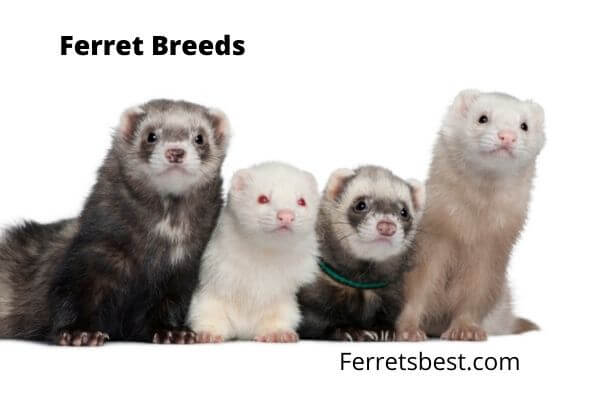 When most people think of a ferret, they usually think of the striking and traditionally colored bandits, the dark fur and the telltale mask. The more you research about ferrets you do however, the more you will realize that there are more to ferret breeds than meets the eye. This article will give you more information about various ferret breeds and their defining characteristics.

When looking at ferret breeds, it is important to note how they are characterized. Ferrets have two types of hair: guard hair, which are the top hairs that give the coat the characteristic colors and patterns, and the undercoat, which is the shorter hair that protects the skin and gives the fur it’s under coloring.

One thing to note about your ferret’s coloration is that it is not uncommon for ferrets to change color depending on the season, as well as throughout their life as they get older. If you see your ferret changing colors, it’s probably not something to worry about. However, if your ferret is losing patches of fur, that is cause for concern.

The cinnamon ferret is the most uncommon colors of ferrets. This coloration features a cream or white undercoat with reddish guard hairs. This coloring tends to have the mask as well as a light colored nose, with dark brown or black eyes.

An albino ferret is to be completely white, as this due to a genetic lack of pigment. Albino ferrets may have an orange or yellowish cast depending on the season and whether or not they are in the middle of their shed. Albino ferrets will not have a mask and their eyes will be red or pink.

Named after the distinguished coloration of the famous bear from China, Panda ferrets have distinct patterns of dark and light. The panda ferret can be any color but has an all-white head and shoulders. The rest of the body will be another solid color. No mask is present in this coloration and the eyes will be dark brown or black, with a pink nose.

The black sable ferret is maybe one of the most popular colors of ferrets today and is definitely one of the first colors that come to mind when people think of a ferret. This ferret has a light undercoat, generally white or cream, and black or dark brown guard hairs. The most distinguished part of the ferret is the dark mask surrounding their eyes that is outlined in white which gives them their characteristic bandit appearance. Their eyes are black, but can also be green or blue, and they tend to have a black nose or pink with dark spots. This color is also known as the polecat coloration.

Chocolate ferrets are similar to the dark or black sable ferret but do not have the distinct mask that sables have. The undercoat is white and the guard hair has heavier concentrations throughout the body than some of the other colors. The nose is pink or chocolate in color and the eyes are blue, green, or black.

No matter what ferret breeds you find most attractive or decide to bring home with you, rest assured that ferrets make fantastic pets. Be sure to check out our other articles about pet ownership to help you get ready to bring your new friend home!