Ferrets As Pets: Pros and Cons 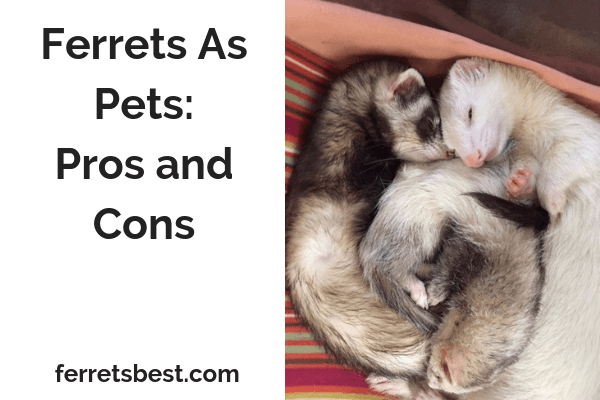 Ferrets As Pets: Pros and Cons

If you are contemplating bringing a ferret into your family, you may be asking yourself “What are the pros and cons of owning a ferret as a pet?” Ferrets can make wonderful pets, but there are some things to consider before bringing one into your home. This article will give you everything you need to know about the pros and cons of ferrets as pets.

Ferrets Can Be Incredibly Affectionate

One of the biggest surprises for people who have never spent time with a ferret is how affectionate these animals are. Ferrets love to snuggle, play, and give kisses to almost everyone, but are particularly affectionate with their owners. Ferrets get along great with other ferrets (it’s best if you adopt more than one at a time), certain small animals, as well as ferret friendly cats and dogs.

Ferrets are incredibly joyful and playful animals. They enjoy playing with toys, humans, and other ferrets, and will make a noise called “dooking” and roll around on the floor to display their happiness. Many ferrets will be right at the door to greet you when you get home and attack your feet as you are trying to take off your shoes in an attempt to provoke a play fight.

No doubt about it, ferrets need plenty of time out of their cage each day for both their physical and mental health, but this is not an animal that requires hour long walks outside. This is a perfect animal for a small apartment that does not have room for a larger animal. Ferrets love boxes, toys, and tubes, and these, along with you, are enough to provide adequate stimulation.

If you are a busy person, but want a pet, ferrets can be the ideal solution. They sleep long hours during the day (18 – 22 hours!), and when you get them out to play, they play intensely for a short time (30 – 60 minutes), and then they are ready for sleep again! The rest of their time is divided between eating, drinking, toileting and stretching!

It is recommended you have your ferrets out to play every day for at least an hour morning and night, and give them lots of cuddles and fun things to play with. It’s highly recommended that you have at least 2 ferrets, so they can keep each other company when you are not home.

Most ferrets are very quiet animals. Even the “dook, dook” sound is a gentle throat sound. This makes ferrets ideal pets in an apartment or close housing situation where a noisy pet is not suitable.

Ferrets Can Be Expensive

In both initial cost and long term cost, ferrets are not cheap animals to bring into your home. A ferret itself can cost anywhere between $75 and $200, with initial supplies can cost up to another $300 or more. Ferret food is also fairly expensive, as it needs to be high quality fat and protein with little to no grain fillers.

Ferrets also need to be seen at least once a year by a vet for a checkup to prevent any diseases as well as booster vaccinations for rabies and distemper. As ferrets age, they become more prone to ailments such as adrenal disease and other forms of cancer that can be very costly to treat.

Ferrets Are The Ultimate Escape Artists

Before you bring a ferret home, it is vital that you “ferret proof” your home, blocking up every tiny little hole that they could possibly get lost in! (especially if you have a small, VERY active female like us!). Even once you have secured your home, you need to keep an eye on them when they are out of their cage, because ferrets will find many unique and varied ways to escape the safe space and find mischief and adventure!

Ferrets Can Be Stubborn

Ferrets are very strong willed, and very rarely does a ferret stop doing something that they want to do. This can make litter box training particularly difficult, depending on the personality of your ferret, and some ferrets can be particularly determined to get into cupboards, underneath ovens, and up on top of dressers.

Ferrets Can Be Smelly, But Don’t Have To Be

Ferrets have a terrible reputation for being the smelliest of all pets, but this is an unfair reputation. As long as ferrets are well cared for and their cage and litter boxes are cleaned on a regular basis, there is no reason that a ferret should smell more than any other animal. Ferrets begin to smell when there are too many of them housed in too close quarters, their litter boxes aren’t changed enough, or during their shedding season and they aren’t bathed if it is necessary.

Ferrets Are Considered Exotic Animals In Some States

Conclusion to Ferrets as Pets

As we consider the pros and cons of ferrets as pets, there are definitely some drawbacks of ferret ownership depending on your personal situation, but ferrets make absolutely amazing pets if you are ready and able to bring one into your family. Check out our other articles as you begin your journey into ferret ownership in order to fully prepare yourself for the fantastic adventure of ferret ownership.