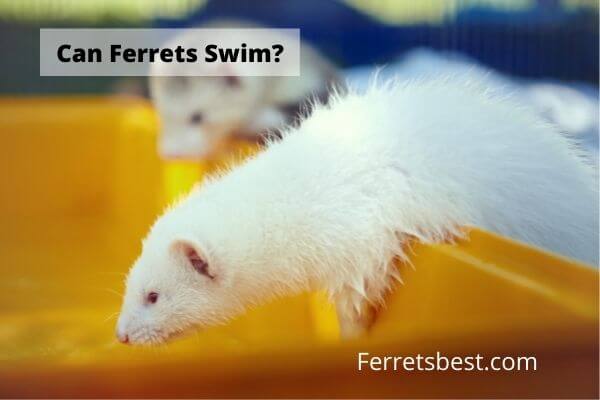 Ferrets have a notorious reputation for being smelly animals. While ferret owners know that they aren’t anywhere near as smelly as people make them out to be, there is no doubt that every once in a while you may be forced to give your ferret a bath, either due to them getting in something potentially harmful or to help them along during their shedding season. Before you give your ferret its first bath, you may be wondering- can ferrets swim? The short answer is yes, ferrets can swim. However, there is a little bit more to it than that.

Yes Of Course Ferrets Can Swim

A healthy ferret should have the ability to swim. Like dogs and cats, ferrets in the wild will swim to cool down, to evade predators, or even to pursue prey. Ferrets in the wild learn by watching their mother, and domesticated ferrets still have that instinct.

The question becomes a little bit more murky when the question is if ferrets enjoy swimming. Some ferrets absolutely love swimming, baths, and making an absolute mess in water. Other ferrets are much more wary of water for one reason or another, and no amount of training will do anything to change that fact.

Gently Introduce Your Ferret To Water And Swimming

Since some ferrets are naturally more adverse to water, it is important to introduce all of your ferrets to water in a non-stressful environment at an early age. Rather than starting them out in the bathtub, begin with lukewarm water in a sink or a large basin that they can easily touch the bottom in and crawl out if they become uncomfortable. Introduce the ferret to the sink or basin after the water has been added, as the sound of running water may be overwhelming to your ferret. Give them lots of praise and treats, and allow them to get out of the water if they are uncomfortable.

If your ferrets are comfortable with the sink or basin, then it’s safe to introduce them slowly to the bathtub or larger body of water. When transitioning your ferret to the bathtub, they may feel better if you are standing or kneeling in the tub with them to reassure them.

Keep a close Eye on Your Ferret While They Are Swimming

It is important to note a couple of different things about ferrets swimming. It is key that ferrets are always closely supervised when around any significant body of water to ensure that no tragic accidents occur as a result of a swimming loving ferret unable to get out of a bathtub or toilet.

Additionally, it is important to not overwash your ferret. Domesticated ferrets are generally not meant to spend a lot of time in the water, and over washing and shampooing your ferret unnecessarily can cause them to produce excess amounts of oil, which can cause your ferret to smell even more distinctly ferretish. This can also cause your ferret to be uncomfortable and itchy.

Know And Listen To Your Ferret

All in all, as with any part of ferret ownership, it is important to simply listen to your ferrets cues and respond when it comes to swimming and bathing. Also keep in mind that all ferrets are not equal, and just because one of your ferrets love to swim doesn’t mean another one will. Make sure to take a peek at our other articles on ferret ownership to ensure that you are fully prepared to take a new ferret friend home!