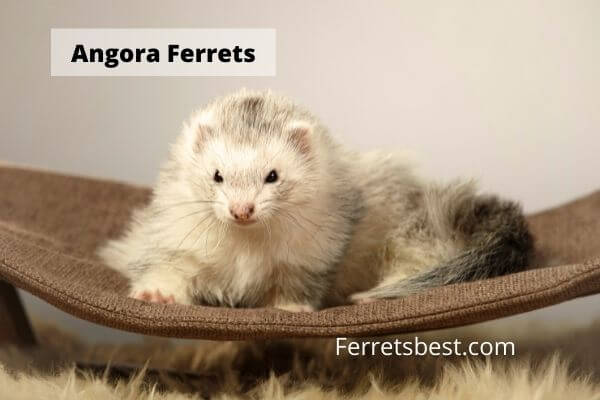 When you hear the word angora, you probably immediately think about rabbits, but angora ferrets are an incredibly adorable long haired pet that you should definitely consider bringing into your home. However, the angora ferret is not one that you generally see in the average pet store, so you may have a couple of questions about this long haired ferret. This article will go over what angora ferrets are, how they are different from other ferrets, and where to find angora ferrets if you decide this is the pet for you and your family.

What Is An Angora Ferret?

An angora ferret is a distinct animal characterized by a couple of different characteristics. First, as they are named, the ferret has fur in 2 to 4 inches in length. Additionally, that fur does not have an undercoat, so their hair is all the same length. The angora ferret also has a cleft nose, which is indicative to whether the angora is full, half, or semi.

How Do Angora Ferrets Differ From Other Ferrets?

Realistically, there shouldn’t be much difference between an angora ferret and the ferrets that you find in breeding facilities and pet stores throughout the world. They will have similar personalities and temperaments as a regular ferret. Some people will argue that since angora ferrets are bred selectively for their long haired gene that they are immune to various diseases and illnesses that many pet store and backyard breeders ferrets are prone to developing. On the other hand, opponents of the breed are concerned that those who breed angora ferrets are not caring about the individual animals but instead are capitalizing on a genetic disorder that causes them to be different.

How Are Angora Ferrets Bred?

Angora ferrets were originally found at a Swedish breeder who noticed some of his ferrets had long hair on their lower back and hind legs. These ferrets were sold to another breeder who was able to develop the angoras that we know today.

If there is one argument about angora ferrets having some poor genetic dispositions, it is that angora jills are unable to produce enough milk to feed their litter properly. This means that breeders will use a non-angora jill and breed half-angora ferrets or will use an angora jill and closely monitor the young ferrets multiple times throughout the day to hand feed them as necessary.

Where To Find Angora Ferrets?

As discussed before, angora ferrets are definitely not the average ferret that is found in any pet store throughout the world. As with any ferret, it is important to know where your ferret is coming from. Research your breeder closely prior to purchasing to ensure that the breeder is caring for the wellbeing of the animal instead of just making money off repeatedly breeding their jill.

Additionally, you can also always work with a local ferret rescue to foster or adopt an angora ferret if they have one come through their organization.

Angora ferrets, like any ferret, are fantastic additions to your family, as long as you are properly prepared for the responsibility of pet ownership. If you are still unsure about whether or not bringing a ferret into your family is the right thing for your household, check out our article on the pros and cons of pet ownership.